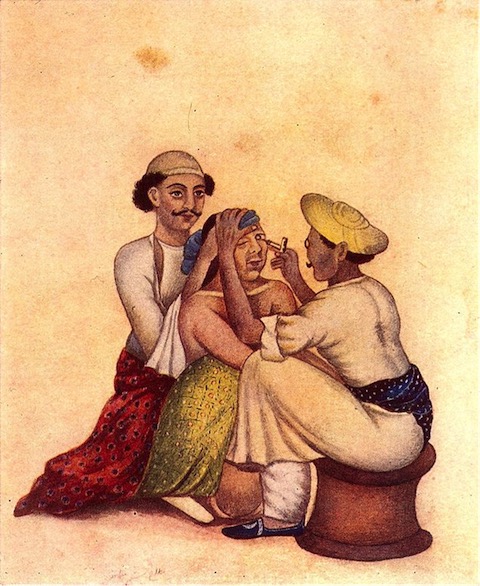 ·         Gullstrand was the first ophthalmologist to win the nobel prize.

·         sub-Tenon approach by a plastic cannula was proposed by Greenbaum

·         Mark S. Andrew, MD and Mylina Lincoln-Andrew, MS, developed the proprietary technology known as phaser-liquefaction as a new surgical approach toward tissue removal (ie, diseased dental tissue, liposuction). The Andrews granted a license to Alcon, Inc (Fort Worth, Tex) to develop ophthalmic products based on this technology. Using the phaser-liquefaction technique developed by the Andrews, Alcon has produced the AquaLase, which uses high-velocity, high-energy pulses of warmed balanced salt solution (BSS) to break up the lens and facilitate removal by aspiration of the lens fragments at the same time.

·         Traditional phacoemulsification was first introduced by Charles Kelman in 1968.

·         In 2001, WhiteStar Hyperpulse Technology was introduced by Advanced Medical Optics (Santa Ana, Calif ). This technology utilizes extremely short phaco pulses of 4 ms in length to minimize heat buildup during ultrasound. The thermal safety of the hyperpulse technology was shown in cadaver eye experiments done by Dr. Randall Olson.
Also, in 2001, Alcon, Inc introduced a sonic oscillatory technology called NeoSoniX that further increased the effectiveness of lens nuclear removal. This oscillatory motion moves lens nuclear material on the phaco tip and increases the surface area of contact between the tip and the lens material. NeoSoniX allows for a reduction in the total ultrasound power that is needed to remove nuclear material of varying densities.
Torsional phacoemulsification is a new ultrasonic technology from Alcon that has evolved from NeoSoniX. This technology was first introduced at the 2005 American Academy of Ophthalmology meeting as the OZil handpiece on the INFINITI Vision System (Alcon, Inc). Torsional phaco works by utilizing a side-to-side motion (32,000 times per second) at the tip of a curved or angulated phaco needle.

·         The combination of less movement and reduced frequency results in a two-thirds reduction of thermal risk for torsional phaco versus traditional phaco at the same power modulation. Dr. Richard Mackool demonstrated this in the following experiment. Using a thermal imaging camera, he looked at heat generated at a closed wound with no aspiration flow using traditional ultrasound compared to torsional ultrasound.

·         Helmholtz is recognized today as the inventor of the direct ophthalmoscope. Perhaps the first ophthalmoscope was invented by Charles Babbage in 1849.
Hermann von Helmholtz had five major accomplishments relating to ophthalmology, i.e. invention of an ophthalmoscope (1850), confirmation of the Thomas Young theory of color vision (1852), elucidation of the mechanism of accommodation (1854) and development of an ophthalmometer (1854). Ophthalmometer was the first device to measure corneal curvature accurately. Although, his ophthalmometer was a research tools, later modifications led to clinically useful models like keratometer.

·         Doctor Danielle Avon Rosa first demonstrated that Nd: YAG laser posterior capsulotomy was a safe and effective therapy for the treatment of PCO

·         Rosengren  founded the concept of internal tamponade by air.

·         Machemer recognized value of tamponade with expansile and  longer persistence  gases than air.

·         The entity of retinal detachment was recognized early in the eighteenth century by de Saint-Yves, who reported the gross pathologic examination of an eye with a detached retina. The first clinical description did not appear until almost a century later, in 1817, when Beer detected a retinal detachment without the benefit of an ophthalmoscope.

·         In 1869 Iwanoff described the entity of posterior vitreous detachment.

·         Scleral buckling was first described in 1937 by Jess, but this brief mention in the literature was overlooked until Custodius developed the procedure 12 years later.

·         Although Bietti reported the use of cryosurgery for retinal detachment in 1933, it was Lincoff who developed and popularized this valuable method in 1964.

·         PNEUMATIC RETINOPEXY, First performed by Ohm in 1911, the use of intravitreal air injection for retinal detachment was developed by Rosengren in 1938.
In 1985 Hilton and Grizzard published the fi rst report using the procedure they named, pneumatic retinopexy.

·         The technique of scleral indentation was originally suggested by Trantas in 1900, who while examining with the direct ophthalmoscope pressed the globe with his fingernail. The thimble depressor of Schepen’s permits easy and accurate depression.

·         In 1916, ALBERT EINSTEIN laid the foundation for invention of laser and its predecessor, the MASER.

·         Worth in 1903 classified the binocular vision in three grades and devised the four dot test. Maddox emphasized the treatment of abnormal retinal correspondence and Mary Maddox was first to organize the orthoptic clinic in London.

·         Bangerter (1946) coined the term pleoptics which included all treatment of amblyopia by whatever method, including conventional, collision.

·         A clinical instrument for the measurement of aniseikonia was essentially a haploscope and is original eikonometer of Amas.

·         Cuppers devised a more refined system by designing the visuscope, an ophthalmoscope that projects a small star as a fixation object onto the retina. Its position on the retina indicates the area patient uses for fixation.

·         The present term open angle and closed angle glaucoma was adopted by a symposium organized by the Council of International Organization of Medical Services.

Rangaswamy Srinivasan: In 1981, Srinivasan discovered that an ultraviolet excimer laser can be used to etch a living tissue precisely without causing any thermal damage to surrounding area. He named it Ablative Photodecomposition (APD).


Purkinje is a known to all ophthalmologists for Purkinje's cells, Purkinje's images. Jan Evangelista Purkinje was a versatile scholar with wide-ranging interests and an exceptional capacity for innovative thinking. He used the name “Purkinje” until 1850, from whence he used the correct spelling, Pyrkyně. We use Purkinje for the eponyms because that is the more common. Purkinje was a Czech nationalist and had a major influence on Czech cultural life in the middle of the 19th century. He was a friend of the famous German poet Johann Wolfgang von Goethe, who wrote about Purkinje: “and should you fail to understand, let Purkyně give you a hand!” Purkinje published a Czech translation of Friedrich Schiller's poems, and translated works of William Shakespeare into Czech.

Purkinje created the world’s first department of physiology at the University of Breslau, Prussia in 1839 and the first official physiological laboratory, known as the Physiological Institute, in 1842. Purkinje used to believe that that experiments in one's own body ("in corpore nobili") gave more practical results than those in animal experiment ("in corpore vili") or in fatally ill patients. And when he was a medical student, Purkinje used to investigate the physiology of sight by experimenting on himself with a variety of drugs, including Belladonna. His interest in the physiology of light led him to make animated cartoons, and thus he became one of the earliest motion picture pioneers.

He is best known for his discovery of Purkinje cells, large nerve cells with many branching extensions found in the cortex of the cerebral cortex. He is also known for his discovery of Purkinje fibers, the fibrous tissue that conducts the pacemaker stimulus along the inside walls of the ventricles to all parts of the heart. It was Purkinje, who introduced the scientific terms plasma. An early user of the improved compound microscope, he discovered the sweat glands of the skin, germinal vesicles. He recognized fingerprints as a means of identification and noted the protein-digesting power of pancreatic extracts. He died on July 25 of 1868.


Friedrich Gustav Jacob Henle, who is known to us for Henle’s layer, Hassle-Henle bodies, loop of Henle, was a German anatomist and pathologist. He was a man of wide interests, equally at home with the arts as with science. He was a fine musician, playing the violin, viola and violin cello. In his young age, Henle thought of becoming a minister. His political ideas were liberal and nationalistic. But in1835 Henle was arrested and detained in Berlin & was released from confinement after four weeks.

He wrote Handbuch der rationellen Pathologie (Handbook of Rational Pathology), Allgemeine Anatomie (General Anatomy), which is the first systematic work on histology. Henle published the first descriptions of the structure and distribution of human epithelial tissue and of the fine structures of the eye and brain. Along with Gabriel Valentin, Henle was among the first authors to use the term “cell”.
During his stay in Zurich he fell in love with Elise Egloff, who worked as a governess in the house of his friend. He set her up in her own lodgings and later arranged for his sister to educate her and give her social polish. They were married in March 1846. One son and one daughter resulted from this union, which ended barely two years later with his wife’s death from tuberculosis. In August 1849, Henle married Marie Richter, the daughter of a Prussian officer; they had four daughters and one son. Henle was very sociable. He loved witty conversations, encouraged home musicals and evening gatherings for reading, and was happy to open his house for concerts. He died of renal and spinal sarcoma on13th May in 1885.


Hermann Ludwig Ferdinand von Helmholtz was a German physician and physicist. In the words of the 1911 Britannica, "his life from first to last was one of devotion to science, and he must be accounted, on intellectual grounds, as one of the foremost men of the 19th century."
As a young man, Helmholtz was interested in natural science especially mathematics, but his father wanted him to study medicine because there was financial support for medical students.
His investigations occupied almost the whole field of science, including physiology, physiological optics, physiological acoustics, chemistry, mathematics, electricity and magnetism, meteorology and theoretical mechanics. In physiology and physiological psychology, he is known for his mathematics of the eye, theories of vision, ideas on the visual perception of space, color vision research, and on the sensation of tone, perception of sound, and empiricism. In physics, he is known for his theories on the conservation of force, work in electrodynamics, chemical thermodynamics, and on a mechanical foundation of thermodynamics. As a philosopher, he his known for his philosophy of science, ideas on the relation between the laws of perception and the laws of nature, the science of aesthetics, and ideas on the civilizing power of science. Albert Einstein once said “I admire the original, free mind of Helmholtz”

Helmholtz revolutionized the ophthalmology with the invention of the ophthalmoscope. It arose from an attempt in 1850, to demonstrate to his class the nature of the glow of reflected light sometimes seen in the eyes of animals such as the cat. Helmholtz first disclosed about his discovery to his father. In a letter to his father in 17th December, 1950 he wrote “I have make a discovery during my lectures on the Physiology of the Sense-organs, which may be of the utmost importance in ophthalmology”. When the famous ophthalmologist, von Gräfe, first observed the fundus of the living human eye, with its optic disc and blood-vessels, his face flushed with excitement, and he shouted, "Helmholtz has unfolded to us a new world!"

Calabar bean (Physostigma venenosum) is the seed of a leguminouis plant found in Calabar, in the eastern region of Nigeria. In those days, a solution of the seed extract was used by the natives for judicial execution – if the man vomited it back then he was considered innocent. Argyll Robertson instilled an extract of calabar bean into his own eye and made the deduction that physostigmine contracts the pupil. He predicted it would become “an agent that will soon rank as one of the most valuable in the ophthalmic pharmacopoeia”. The same year, his teacher von Graefe utilized its miotic effect to facilitate iridectomy.

Argyll Robertson was a man of broad medical interests, always emphasizing the role of ophthalmology in a wider medical context. But he left no large number of medical publications; according to his obituary he "preferred the tongue to the pen as a medium". In 1908, he made a journey to India. He caught a cold in Gondal near Bombay, and died there.