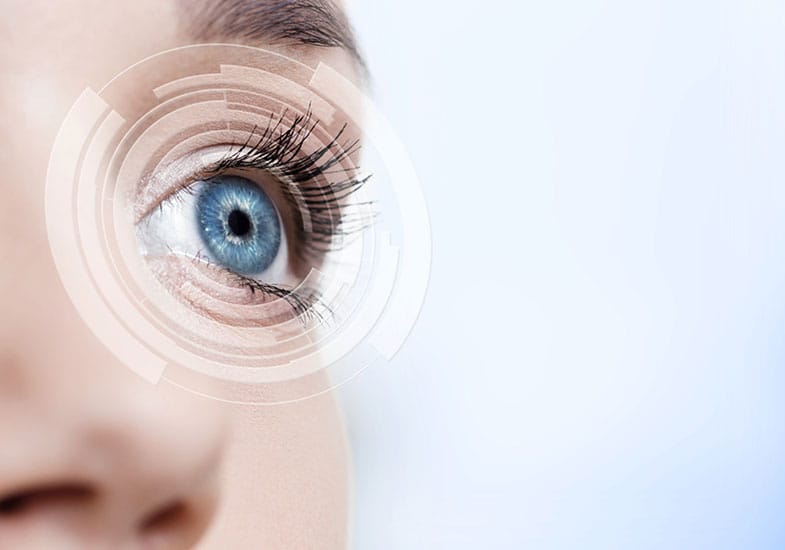 ·         Listing's law:
Each movement of the eye from primary position to any other position involve rotation around a single axis lying in the equatorial plane (Listing plane)

The purpose of voluntary eye movements is to point the region of highest visual acuity (the fovea) at the object of interest. Because the eye can rotate about the line of sight without changing the direction of gaze, the latter has only two degrees of freedom, whereas eye orientation has three. This situation, called kinematic redundancy, implies that an infinite number of different eye orientations correspond to each direction of gaze. Despite this redundancy, observation of voluntary eye movements reveals that the brain constrains the torsion to be a function of the horizontal and vertical gaze direction. This reduces the number of degrees of freedom of eye orientation from three to two, so that each gaze direction (achieved with saccadic or smooth pursuit movements) corresponds to a unique eye orientation, regardless of previous movements and orientations. This observation is known as Donder's law.

·         Donder's law:
“To each position of the line  of sight belong a definite orientation of the horizontal and vertical retinal meridian related to coordinate of space"

·         Hering's law implies that there is equal innervation of yoked muscle pairs: “one and the same impulse of will directs both eyes simultaneously as one can direct a pair of horses with single reins.” The law should not be taken literally, because common gaze commands from higher levels are eventually parceled into separate innervation sources in the brainstem that control individual muscles in the two eyes.

·         Sherrington's law of reciprocal innervation states that increased innerva tion a nd co n­ traction of a given extraocula r muscle a re accompanied by a reciprocal decrease in i nne r­ vatio n a nd contracti on of its antagonist. Fo r exa mple, as t he right eye a bd ucts, the right la teral rectus muscle receives increased inner vation while the right medial rectus receives decreased innervat ion.

·         Alexander's law :
The amplitude of the nystagmus is highest when gaze deviates in the direction of the fast phase.

·         BF through a blood vessel depends upon the perfusion pressure (PP), the pressure that drives blood through the vessel, and the resistance (R) generated by the vessels. For an incompressible uniform viscous liquid (dynamic viscosity η) flowing through a cylindrical tube (length L) with radius (r), BF is given by the Hagen–Poiseuille law: BF = PP/R, where R = ηL/2πr4. Many factors make it difficult to directly apply this law to a microvascular bed. These include the η-dependence on local hematocrit, the changes in the velocity profile of the RBCs and shear rate at branchings and junctions and others. Another approach at characterizing BF through a system of vessel is based on Murray's law,[173] which says that through each vessel of a circulatory system with optimal design (blood flowing with minimal loss of energy) BF = k(r3/√η). The constant k depends upon the lengths and the radius of the vessels

·         The formula that describes this time–intensity reciprocity is Bloch's law: Bt = K
where: B = Luminance of the light, t = Duration, K = A constant value.

·         According to Knapp's law, the size of the retinal image does not change when the center of the correcting lens (to be precise, the posterior nodal point of the correcting lens) coincides with the anterior focal point of the eye
When applied to lensmeters, Knapp's law is called the Badal principle. One type of optometer used for performing objective refraction is based on a variation of Knapp's law wherein the posterior focal plane of the correcting lens coincides with the anterior nodal point of the eye. The effect is the same. Retinal image size remains constant. In this application, the l aw is called the optometer principle. Optical engineers use a va riation of Knapp's law called telecentricity to improve the performance of telescopes and micro­ scopes. Regardless of the name, the principle remains the sa me.

·
·         The Dowling–Rushton Law is the empirical relationship between bleached pigment and sensitivity. Rather than being linear it is, to a good approximation, logarithmic, given by the equation L It = α (1 – ρ) where It is threshold, ρ is the proportion of pigment, and a is a constant.